This article previously appeared on the Westwood One blog and is re-posted with permission from the author.

Why Is P&G The Fastest Growing Advertiser On American AM/FM Radio?

Media Monitors, the firm that monitors ad occurrences on thousands of U.S. radio stations, is out with their tally of 2018 U.S. top advertisers. The new rankings have raised eyebrows.

An examination of the number of ads run in 2018 shows an astonishing trend. Each quarter of 2018, P&G’s radio allocations grew exponentially. 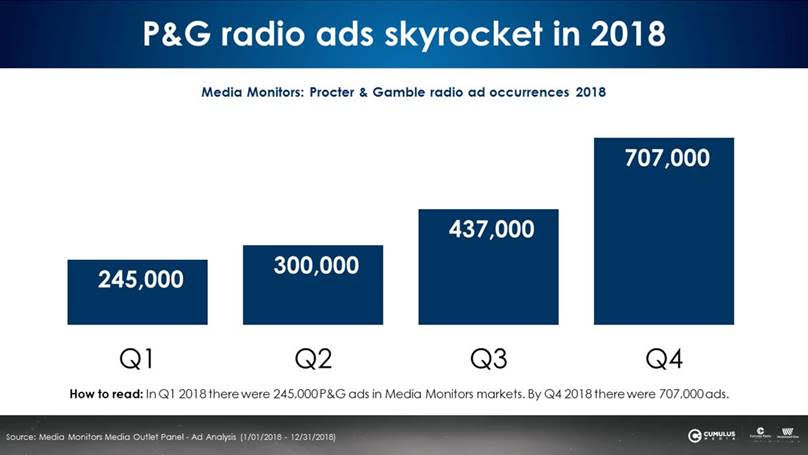 Philippe Generali, CEO of Media Monitors, predicts P&G could be the leading user of AM/FM radio in 2019: “The CPG company is already the #1 advertiser on broadcast TV and cable and is clearly looking to also become a dominant player in the radio advertising world. No doubt P&G loves the additional unmatched reach across the US population that radio can provide to them when they are maxed out on TV and cable.”

Why is P&G turning to AM/FM radio?

Fix said, “P&G wants to reach as much of America as it can, once a week … While TV has been its media cornerstone, it’s a costly investment to use television to reach 72% of the U.S.” He continued, “The brands are looking to get the reach they want and they can’t get it with TV. Knowing that, radio seemed to be an option.”

P&G is using radio in media buys to reach those TV can’t reach. Fix explained, “You saw 93% of households are listening to radio. That’s the scale I need for my brands to reach the people that buy them.” 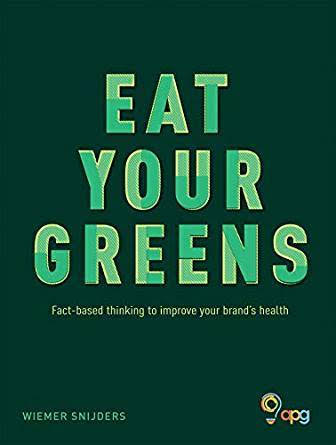 It seems P&G is following the playbook for brand building. Eat Your Greens by Wiemer Snijders is filled with powerful and sensible marketing insights to help improve advertiser brand health. In it, Peter Field, one of the godfathers of marketing effectiveness, explains, “Brand building … means creating mental structures (associations, memories, beliefs etc) that will predispose potential customers to choose one brand over another. This is a long-term job involving conditioning consumers … so it takes time: talking to people long before they come to buy. It requires broad reach media, because the aim is to prime everyone in the market, regardless of whether or not they are shopping right now.”

Les Binet and Sarah Carter: Go for reach, rather than frequency 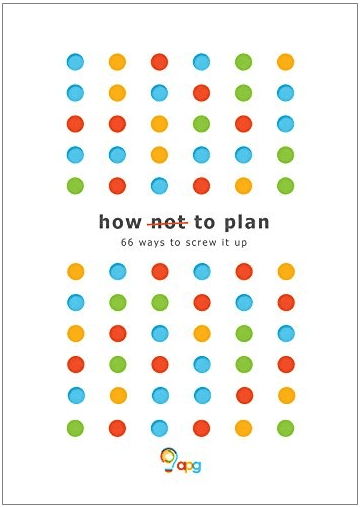 The new marketing account strategy book How Not To Plan: 66 Ways to Screw It Up from Les Binet and Sarah Carter offers these recommendations:

For the first time, agencies and their clients can now see the incremental reach lift achieved by adding radio to TV and digital plans. In one demonstration, a brand spending $22 million a month in television saw monthly reach soar from 68% to 90% with a 20% reallocation to AM/FM radio. Same budget, 32% lift in reach.

P&G understands something the majority of marketers and advertisers have completely missed. According to Nielsen, America’s number one mass reach media is AM/FM radio. It is bigger than TV and bigger than social and online video.

AM/FM radio’s massive reach is lost on most advertisers. For four years, Advertiser Perceptions studies of over 1,200 media agencies and marketers have found the perceived reach of U.S. radio is stunningly lower than Nielsen reality.

Why are media agencies and their clients so out of sync with actual consumer media habits? Legendary marketing professor Mark Ritson explains, “There is increasing global evidence that marketers are basing their media choices on their own behavior or that stoked by the digitally obsessed marketing media, rather than actual audience data.”

In How Not To Plan: 66 Ways to Screw It Up, Les Binet and Sarah Carter remind agencies and brands, “We’re marketing and communication people, we’re different from the majority. In the US and UK, we’re less than 1% of the population. We tend to be younger. Richer. Better educated. Without kids. And we live in a handful of big cities. So it’s all too easy for us to overlook how different our lifestyles and perceptions are from the people we talk to.”

Acknowledging this, Colin Kinsella, the CEO of Havas Media North America, says, “The biggest risk for radio is the 26-year-old planner who lives in New York or Chicago and does not commute by car and does not listen to radio and thus does not think anyone else listens to radio.”

Take it from P&G. Here’s what brands can learn from their AM/FM radio rediscovery: