This article originally appeared on Radio Ink, reposted with permission of the publisher.

That’s according to a 2019 prediction report released by Deloitte Global, which also predicts radio revenue will hit $40 billion in 2019, an increase of 1% over 2018 (and more than half the global radio revenue).

The firm predicts that radio’s weekly reach will hold steady at more than 85% of the population (Nielsen says that number is in the low 90’s). And, despite the radio doomsdayers who say radio is no longer relevant to the younger generations – because of music apps and YouTube – Deloitte expects more than 90% of 18-34 year olds will listen to radio every week in 2019, “and they will listen to radio for an average of more than 80 minutes every day.” When you compare that to TV, this is something to write home about. TV viewing in that demo is falling at three times the rate of radio listening, according to the new report. “In fact, American 18-34 year olds will likely spend more time listening to radio than watching traditional TV by 2025.”

As iHeart CEO Bob Pittman, Entercom CEO David Field and many other CEO’s have been saying, the report says, radio is commonly underestimated. “Radio is the voice whispering in our ear, in the background of dinner, in an office, or driving in the car. It’s not pushy or prominent, but it’s there.

The report says part of the reason radio is underestimated is because of the way its measured. “When asked to self report their listening habits, humans tend to underestimate it, believing we listen less than we actually do. But the measured reality is radio is still alive and well.” 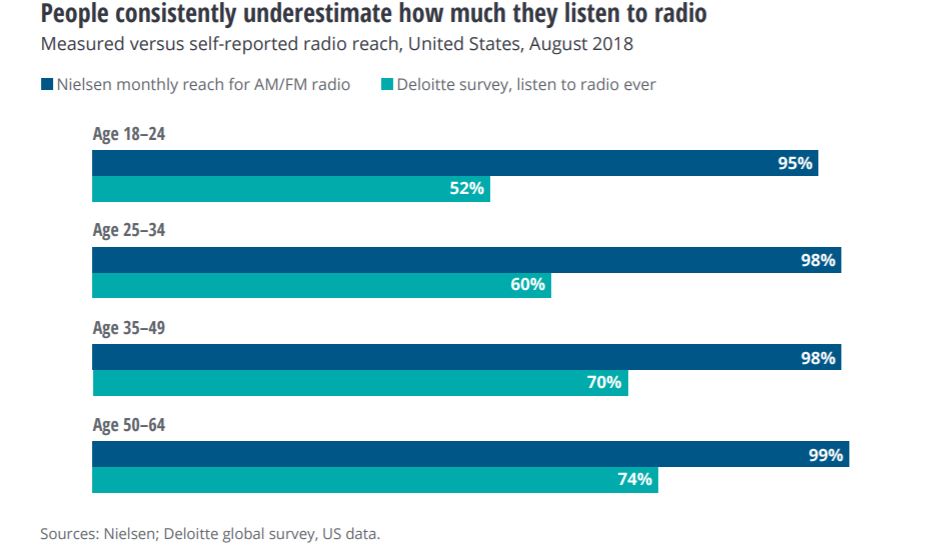 The report also explained why advertiser still love radio, although we always want more to love us. “A major reason advertisers still like radio is its demographics, pointing out that radio listeners are working, are more educated and have higher incomes.

The bottom line, according to the Deloitte report is that radio is not going away, “and should be a big part of the ad mix for those buying advertising.” The report concludes by saying that to attract more ad revenue, radio needs to do a better job disseminating the reality behind radio’s resilience. “The industry itself is partially to blame for these misunderstandings, and an aggressive campaign of myth-busting – always backed up by hard evidence – will likely need to be a key strategy for broadcasters.” In other words, radio needs to be telling a better story – a mantra we’ve heard for at least the past 5 years now. 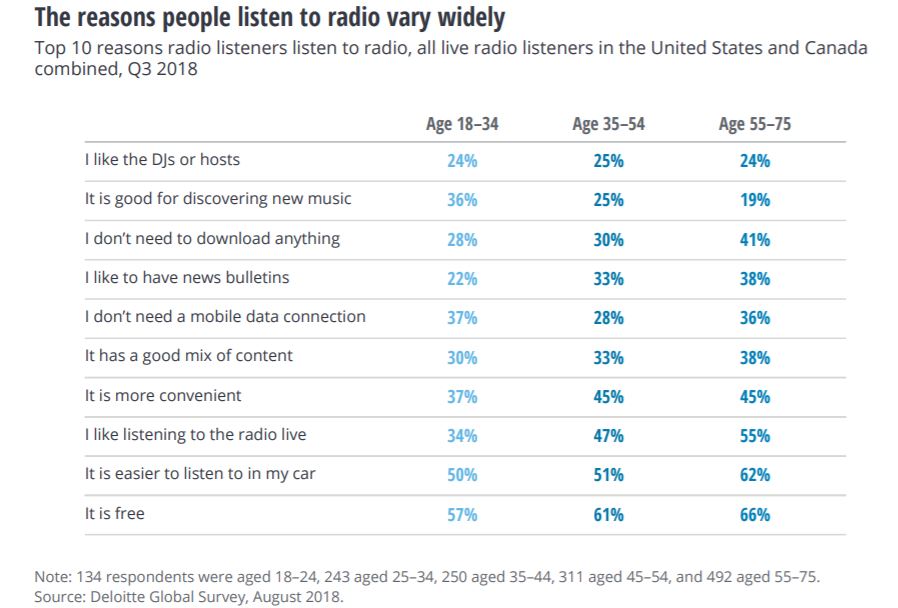