KLCC is ‘NPR for Oregonians,’ a network of 10 FM signals throughout western and central Oregon, including 89.7 FM serving Eugene, Springfield and Corvallis.  KLCC is also heard on FM signals in Bend-Redmond-Sisters, Roseburg-Riddle, Cottage Grove, Oakridge and in Florence, Newport and Reedsport along the Oregon coast.

KLCC is consistently among the region’s most listened-to stations, with programming that includes NPR’s Morning Edition and All Things Considered, in addition to its award-winning local news.

KLCC is a service of Lane Community College.

KLCC serves more than 80,000 listeners each week within a 100 mile radius of Eugene. Besides its main Eugene transmitter, KLCC is heard online and broadcast on FM stations in 9 other communities throughout Western and Central Oregon.

Anchored locally by KLCC’s Anni Katz and Love Cross, Morning Edition takes listeners around the country and the world with multi-faceted stories and commentaries every weekday.

For more than four decades, NPR’s Morning Edition has prepared listeners for the day ahead with up-to-the-minute news, background analysis and commentary. Regularly heard on Morning Edition are familiar NPR commentators, and the special series StoryCorps, the largest oral history project in American history.

Morning Edition has garnered broadcasting’s highest honors — including the George Foster Peabody Award and the Alfred I. duPont-Columbia University Award. 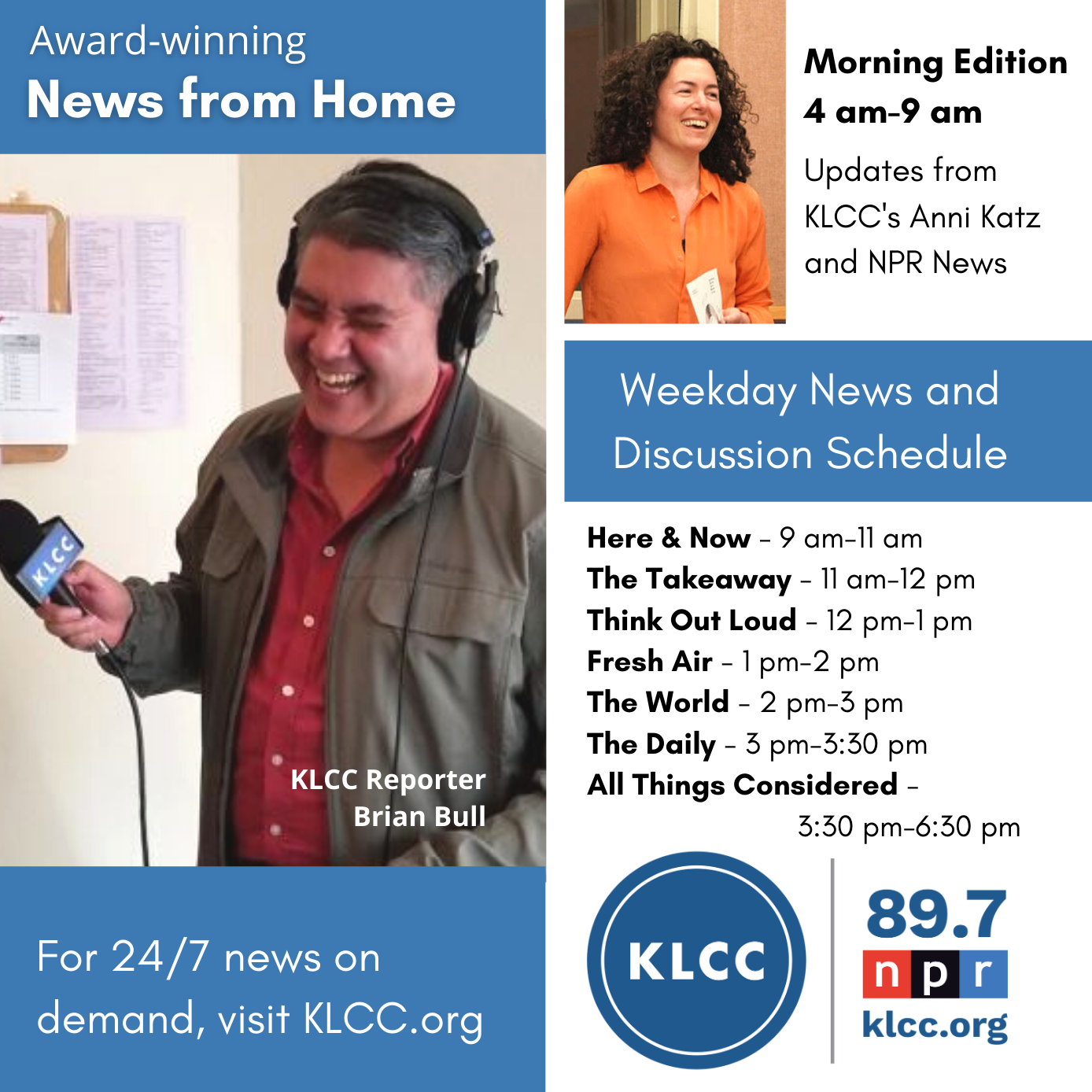 KLCC News is the recipient of numerous awards for excellence from national and regional industry organizations, such as Public Radio Journalists Association, Society of Professional Journalists and Radio and Television Digital News Association.

KLCC is also a member of the Northwest News Network, a regional consortium of public radio stations providing high quality regional coverage from hubs throughout the northwest.

For a wacky and whip-smart approach to the week’s news and newsmakers, listen no further than Wait Wait… Don’t Tell Me!, the oddly informative news quiz from NPR.

During each fast-paced, irreverent show, host Peter Sagal leads what might be characterized as the news Olympics. Callers, panelists, and guests compete by answering questions about the week’s events, identifying impersonations, filling in the blanks at lightning speed, sniffing out fake news items, and deciphering limericks. Listeners vie for a chance to win the most coveted prize in radio: having any of our panelists record the outgoing message on their home answering machine.